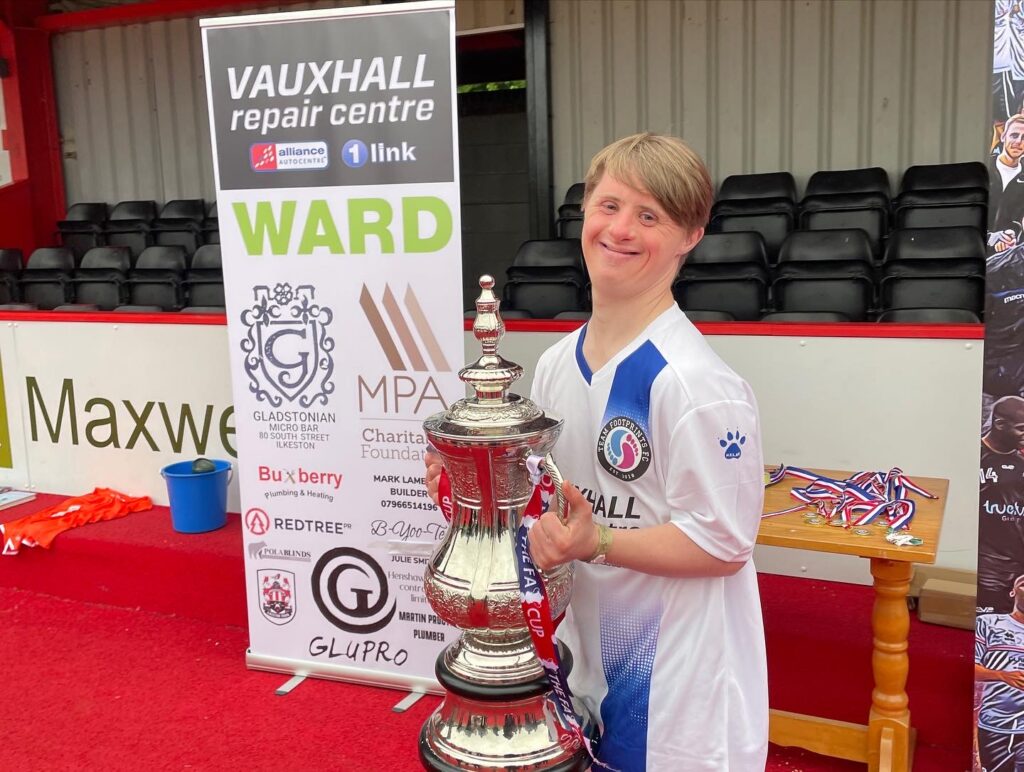 The Greatest Dancer winner and Man of the Match, Andrew Self, lifts the Footprints Cup 2022

Over 1,000 people joined the family fun day at Ilkeston Town FC, despite the rain in support of Footprints. Things kicked off in the morning with a children’s charity football tournament and Nottingham Down Syndrome Support Group took to the pitch to practice their skills.

At 3pm before the whistle blew for the main Footprints Cup, there was an official count from the Guinness Book of World Records to try and break the record of most people wearing odd socks in one place. With a standing record of 933 in the US, the attempt was to raise awareness of Down Syndrome, as the extra chromosome has been compared to an odd sock. Due to strict rules around displaying socks and knees for a full 5 minutes, many people were excluded from the count as they couldn’t roll up their skinny jeans! However, it didn’t stop the group setting an unofficial British record of 756 people all wearing odd socks in one place.

Two celebrity teams including Tik Tok sensation Cal “The Dragon”, footballers Matt Tootle and Eugene Bopp and Hollyoak’s David Bennett played in the charity match, which ended up in an 8-4 win to the home team. The Greatest Dancer star, Adam Self, also scooped man of the match for two goals, a personal best after leaving last year’s challenge without scoring.

Paul Brooks, player and organiser of the charity tournament said: “It was a fantastic day. Naturally we are disappointed that we didn’t make the World record, but it’s amazing how many people turned out on a soggy Saturday to support us. There’s a great team spirit and we’re so grateful to all the players, stewards, volunteers and sponsors who have helped us exceed the amount we raised last year by well over £1,000. A huge thank you to everyone.”

Phil McGovern, Managing Director of wealth management specialist, MPA, who supported the event through its Charitable Foundation, said: “As a local business we are really proud to be able to support the great work that Paul and the Footprints team do to raise awareness of Down Syndrome and rasie funds to support families. The services provided by Footprints and the positive impact on the lives of children with motor learning difficulties, motor delay and Down Syndrome and their families is incredible.”

Footprints Conductive Education Centre is a small Midlands-based charity that supports babies and pre-school children with conditions such as cerebral palsy that cause motor disorders or motor development delay. Its mission is to provide Conductive Education and other services to help children with mobility and communication problems develop the skills they need to thrive and achieve their potential.

Footprints Manager, Andrea Kelly, concludes: “This year’s Footprints Cup has raised a record amount of money for us, even if we didn’t quite make the world record for odd socks. It makes so much difference to Footprints and our ability to help families in Nottingham and the East Midlands. Thank you to everyone who supported us on the day and continues to do so. We look forward to seeing everyone again next year.”

To find out more about the work of Footprints or if you and your family need support, visit: https://www.footprintscec.org/.