We all hear a lot these days about recycling, carbon footprint, climate change, rights and “doing our bit” but is it something our favourite sport takes seriously?  BBC Sport has started monitoring this and now produce an annual “sustainability table”

What is the sustainability table?

First published in 2019 by BBC Sport and the United Nations-backed Sport Positive Summit, teams were asked to provide evidence of efforts in eight categories.

Points were awarded for:

One bonus point was available for each of the following:

So how does the sustainability league table look – the top 5? 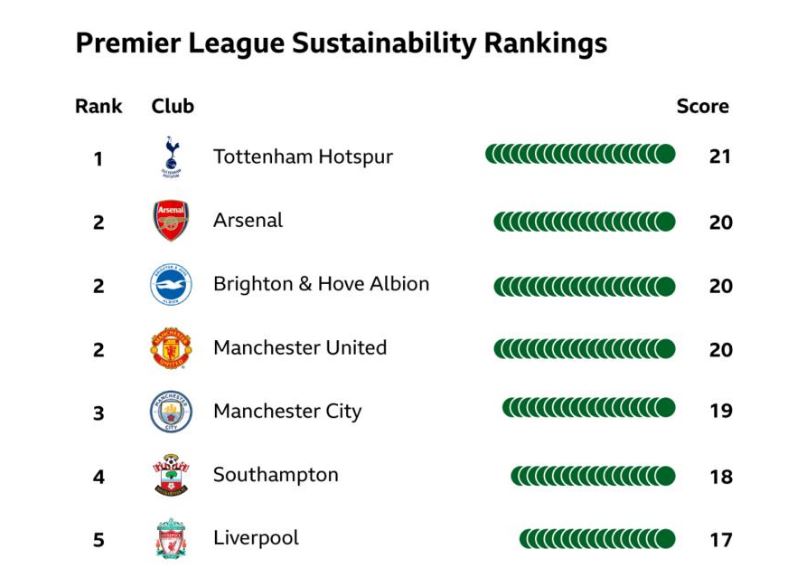 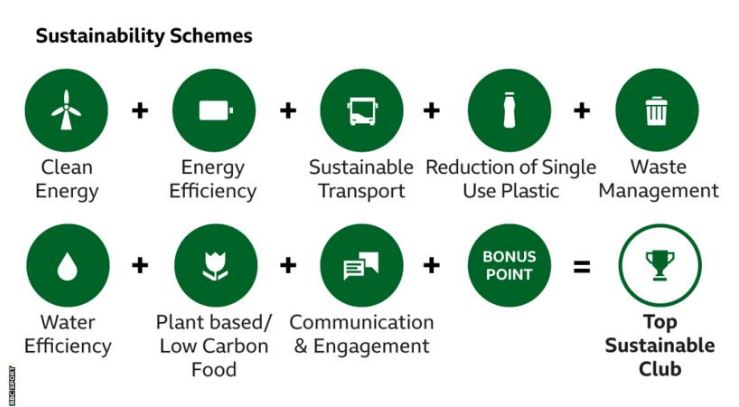 Spurs claimed maximum points in The Green League for 2020, due in part to Monday’s announcement that they have signed up to the United Nations’ Sports for Climate Action framework.

“Looking to our future beyond the current pandemic, our message is that the climate needs to be at forefront of all our minds,” said Spurs chairman Daniel Levy.

“We have seen people take greater pride in their environment during the lockdowns of the past year. When we return to normality, we cannot slip back into bad habits and lose sight of this.”

Tottenham, who tied with Arsenal, Manchester United and Manchester City at the top of the sustainability table in 2019, were the only club to score maximum points in the second edition of the rankings.

There was widespread improvement across the league and the overall the picture was of more being done despite the coronavirus pandemic.

The table’s creator, Claire Poole of Sport Positive Summit, said: “The aim of the table is to encourage engagement and activity among clubs to increase their commitments to sustainability.

“The past year has been brutal on everyone, football clubs included, but when we look specifically at the work here, we can see that many clubs have continued with their commitments to the environment in spite of Covid-19 impacts.

“In fact, many have really upped the ante. Four clubs have signed up to the UN Sports for Climate Action Framework (Arsenal, Liverpool, Tottenham and Southampton), and two clubs have launched far-reaching and incredible strategies around sustainability – Liverpool’s The Red Way and Southampton’s The Halo Effect.

“We are proud that in our conversations with clubs, it has been mentioned that our initial launch of the sustainability table in 2019 raised awareness for some clubs about what others were doing, and perhaps played a small part in some of the progress we are seeing.”

Southampton’s Spanish midfielder Oriol Romeu, one of the few Premier League players to speak out on this issue, says it is important that his club take the issue seriously.

“We do talk about this [as players],” said Romeu. “That is something we are probably 100% on, that we all want to help.”

As for his own efforts, he said he tries “not to consume things that I didn’t really need”, adding: “It’s one of the things I have been trying to learn.

“I know it’s hard and we are in a very consuming moment, but the first thing is to just get those things we really need and make sure that we don’t buy too many things that are not essential for us.”

David Goldblatt, an academic, author and journalist specialising in sport and the environment, said: “Football is the most popular cultural forms in the entire world.

“And the essence of successful climate politics in the next couple of decades is that everyone at every level in every institution in every country in every walk of life has got to be engaged in this.

“And so to have Tottenham and Premier League teams embracing and normalising the issue of climate change with a serious response to it is fantastically good. The league table demonstrates that we’re in the early stages, but useful things are being done.”

Goldblatt said that, while football can help “normalise” climate change action, it needs a “much more radical approach” to reducing carbon to become a “catalyst”.

He said the sport needs to address the “really difficult” area of fans’ travel emissions – when crowds return after the pandemic – as well as the “symbolically important” issue of accepting sponsorship from fossil fuel companies.

“We’re playing against the clock and we’re in extra time already,” said Goldblatt. “Football has woken up to its environmental responsibilities and the environmental dangers facing it. It has extraordinary opportunities.”

It is good to see sport playing it’s part in making positive changes in the way it deals with climate, waste, energy ,human rights and responsible business – it is something that we are seeing a lot more from all industries…